Pictures and my new addiction Daddy and Ava at Animal Kingdom 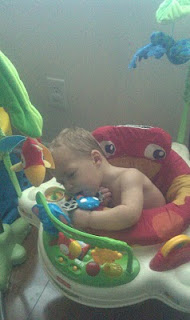 Jacob not wanting to hold his head up 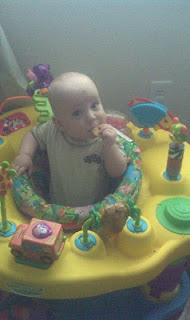 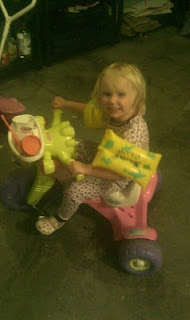 This is what I caught Ava doing in the garage when she was suppose be getting ready for bed.
I have had this horrible desire to gamble and play lotto since my sister FORCED me to go to the casino a few weeks ago. LOL I did develop a scratch off lotto ticket thing when I was going to see Logan late at night...but I had almost overcome it. Anyways, my sister was trying to get me to give her all the points off the Huggies packs before she went home. I decided I was going to start collecting them since I go through a TON of diapers and pull-ups. I had over 100 points from diapers Then I realized that there are tons of free point codes online. I ended up with about 225 points by about 1am yesterday morning. :-) So this is my new addiction....finding pampers and huggies points and going to the website and playing the instant win games for gift cards and coupons. :-D  So far the only thing I won was a free music download. Hey but it entertained me and I was not shopping online.. Jack would be proud.

Jacob was not being my friend by the end of the day. He did good all day today even ate a good part of his bottles and baby food. I tried to give him his bedtime feeding and he was so stiff. He arched back and straitened his legs the entire time. He cried like he was hungry, but then when I put the bottle in his mouth he got pissed. I finally did get him to eat about 4 ounces which he chocked and gaged part of that. I'm sure his lungs appreciated it. :-(

I caught Andrew doing something new today. He was in his crib rolling around then he got up on all 4s and was rocking back and forth. Then he seen me rolled over to his back and giggled. :-) I have been trying to get him to sit up without assistance, but he is so busy reaching for anything he can put in his mouth he falls over after a minute or 2. I hope by their 1st birthday Andrew is close to crawling and at least sitting up. I would be happy if Jacob would just learn how to roll over or even simply reach for a toy. I am going to start working with Andrew with picking stuff up. I bought him the little puff fruit things so he can start learning how to feed himself. He still refused to hold his bottle, but he will eat an entire teething biscuit cookie thing if I give it to him.

Thursday is Jacob's GI appointment in Tampa I suppose we will know if he will be getting a g-tube or not then.
Posted by Jennifer G. at 12:58 AM