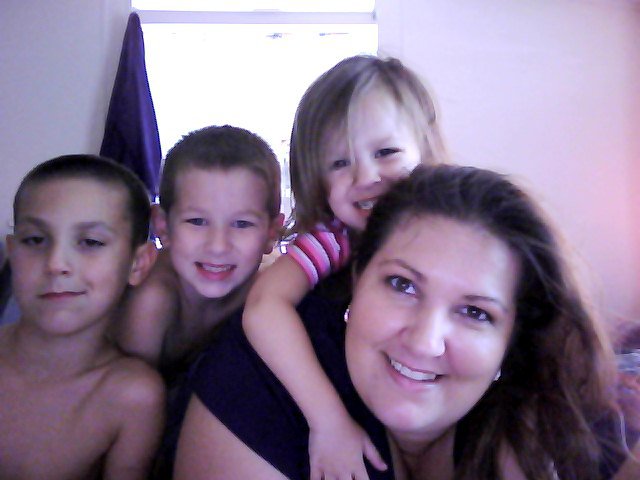 This is my friend Christine. I've known her most of my life. She is an entire 11 months older than me. :-D We grew up together. I met her before I started kindergarten. We used to beat the crap out of each other...I remember when our older sisters used to trap us in the hallway until we beat each other up..lol we were even know to cut large portions of our hair off our heads...man we were bad! Not to mention knife throwing, gun touching, cigarette smoking, catching things on fire, sneaking liquor..WHERE WERE OUR PARENTS!Yeah, I bet no one knew that about me. :-) Ha Ha we always compare ourselves to each other who skinnier who's boobs were bigger etc.. (this still goes on LOL) she usually wins that one.....So if you can imagine the devil on one shoulder and an angel on the other...she was the devil not me! :-) LOL Through out our lives she may have had a bumpier road than mine at times, I can hands down say that when it comes to her children she would die for them. Anyways we have been close and distant from each other. We have taken different paths in life and then always manage to come back together at some point. I love this woman like a sister even when we don't talk for months at a time.
October of 2006 we found out that we were both pregnant. We had due dates within a week of each other...she was actually due 1st, but I won because I was induced a week early. :-) So during the 9 months of our pregnancy we reunited our childhood friendship and made it stronger after not speaking for a long period of time. We found out that we were both having girls etc..When we finally delivered our girls their birthdays were only days apart. Life went on and our lives got crazy. Her and her family moved out of state after the girls turned 1. Outside of a few short visits when she comes to Florida and some messages on facebook we became distant again.

The reason for this post is that my friend who I love very much even though we are so far apart is sick. The beautiful mother of 3 found out a few days ago she may have cancer. She had experienced headaches and fainting spells over the past few weeks. She went to the ER they scanned her head initially sending her home, but then called her back. She had an MRI done shortly after that and they found that she has a tumor of some sort growing from her brain stem. They can not operate on this part of the brain. The doctors believe she has lymphoma. She goes tomorrow for a full body cat scan to see if there is anything abnormal anywhere else in her body. There is not a definite answer that she has cancer yet, but it is very scary knowing that their is something wrong with the part of your brain that causes all the vital functions in the body to operate.

She is only 28 years old. She has 2 sons and a daughter. Her youngest is only 3. Please pray for her and her family. I know they are working on getting health insurance for her right now. I pray this does not hold her back from getting the testing she needs done to figure out exactly what is going and to see if and/or how it needs to be treated. I love you Chris. I want you to know I am here for you and just the thought of something happening to you brings me to tears.

I stole this from someone's facebook post and it is exactly what our friendship is like: Its been said that everlasting friends can go long periods of time without speaking and never question the friendship. These types of friends pick up like they just spoke yesterday, regardless of how long it has been or how far away they live, and they don't hold grudges. They understand that life is busy.....but you will ALWAYS love them.

She may want to kick my ass for publishing her business all over the Internet, but that's okay. It's how I roll. LMAO It would take a really long leg to kick my ass from South Carolina :-) I miss you and I will being praying for you everyday. xoxoxoxoxoxo
Posted by Jennifer G. at 8:32 PM